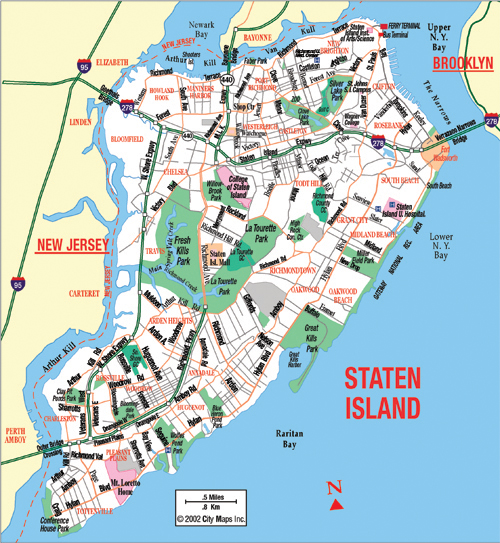 Staten Island is the third largest borough of New York City, yet it is the least populated and most suburban, “often considered a stepchild of its larger siblings.” Listed as a “bedroom community within one of the largest cities of the world,” the Staten Island Historian states Staten Island’s rich history has been “largely overlooked” despite the fact that it’s played “proximately in both the affairs of New York City and our country.”

Staten Island was first discovered by Giovanni da Verrazano in 1524. At the time, it was mostly populated by Raritan and Unamis Indians. Despite attempts by the Dutch to occupy “Staaten Eylandt,” war with the Indians caused them to be driven away. Several wars were instigated by the Dutch but blood was spilled on both sides.

There were a total of three major wars between the Dutch and Indians:

In 1661, the wars and disputes finally ceased. The Dutch established Oude Dorp, or Old Town, close to the South Beach section of Staten Island. When the English took hold of the city for the King of England in 1664, they renamed it in honor of King Charles II’s son, the Duke of Richmond. It’s reported that Staten Island’s population was 1,063 by the end of the 17th century.

Custody of Staten Island: The Legal Battle Between New York vs New Jersey

New Jersey initially claimed control of Staten Island based on possession of an original land grant, according to the Staten Island Historian:

“The grant extended New Jersey’s property rights to the middle of the Narrows, and therefore owned Staten Island. New York claimed jurisdiction over the waters as far as low water mark on the Jersey shore sitting long ownership. The dispute continued for nearly 200 years until 1833 when both states mutually agreed on their borders. New York obtained the right to Staten Island, the Lower New York Bay down to Sandy Hook while New Jersey obtained the rights over the water on the west side of the island as far as Woodbridge creek (near Rossville).”

Richmond began to flourish under ownership of the English. By 1700, the population had grown well over a thousand, consisting of mostly English, French and Dutch settlers. Richmond remained a rural community throughout its early days, supporting various farms, mills and a growing fisherman’s industry.

Staten Island and the Revolutionary War

During the Revolutionary war, Staten Island played a prominent role. George Washington spent two days surveying Staten Island and established a look-out at the Narrows  before the British arrived. This allowed Washington and troops to give warning before British Invasion.

In the summer of 1776, General Howe arrived in New York City after evacuating Boston, intending to land at Gravesend Bay. Upon discovering Washington’s presence was rooted in the area, he receded and waited for military reinforcement, then landed his troops at the Watering Place. Watering Place, now Tompkinsville, was used by Howe and his troops to prepare for their coming battle with American settlers. It’s said that as many as 30,000 troops occupied Staten Island while waiting for the Battle of Long Island.

After the conclusion of the Revolutionary War, many of the Island’s wealthiest and most influential citizens, ones who remained loyal to the Crown, fled to Canada. Their abandoned estates were confiscated by the state of New York, subdivided and sold.

Staten Island became part of New York City in 18944 after a non-binding referendum was overwhelmingly supported by Islanders 5 – 1 (5,531 to 1,505). Interestingly enough, gaining support from other boroughs was not as strong. Brooklyn was split nearly 50/50. Consolidation of Staten Island into the City was finally approved by the New York State Legislature in 1897 over strong objections of New York’s/Manhattan’s mayor.

Since consolidation, roads and sewer systems have improved, but Staten Island’s consolidation has turned out to be something less than as spectacular as promised. Many areas of Staten Island still use septic systems and most of the roads constructed by developers have only a few inches of asphalt paved over dirt. Public rail transportation to Brooklyn or Manhattan has never been developed. In fact, the Island’s only link to the other boroughs is the construction of the Verrazano-Narrows bridge, which opened in 1964.

Staten Islander’s were motivated to action against their stepchild-like treatment when the New York City expressed plans to open a garbage dump at Fresh Kills in 1948. Staten Island assemblyman Edmund Radigan introduced a secession bill to the Legislature in response in 1947.

The proposed dump was an impetus for the legislation, but there where other grievances driving this historical movement. Staten Island hasn’t been able to control its fate since 1799,  when the state took 30 acres of land through eminent domain to build a Quarantine Station. After protesting this for decades, Islanders burned the Station down to send a message to the state.

Assemblyman Radigan expressed Islander feelings that home rule would protect the Island from the city administration and other interests from interfering with “our progress” and gain back local control of their future. The measure was defeated and it was not until the 1980s that another issue would give momentum to a renewed effort to secede from New York City.

On the Board of Estimate, each of the five borough presidents had one vote regardless of population. While this had been organized this way for many years, this structure was challenged for violating the one person, one vote principle of the equal protection clause of the 14th Amendment of the U.S. Constitution. As a result, the U.S. Supreme Court agreed with the ruling and the city Charter eliminated the Board of Estimate in 1989. The entire representation of Staten Island was placed in the hands of a paltry 3 members within a 51-member City Council.

The “loss of representation” convinced Staten Islanders that secession was the only way for them to take control of the Island’s future and quality of life. On the final day of the 1989 session, the State Legislature passed a measure and signed by then Governor Mario Cuomo authorizing a study and initiating the process of secession. In November 1990 the voters of Staten Island overwhelmingly (83%) approved a study of secession and the legal procedures for separation and in 1991, Governor Mario M. Cuomo swore in the 13 member New York State Charter Commission for Staten Island.

In 1993, a hearing was held to see if the island could secede from the city. The New York City government and then-Mayor David Dinkins opposed the vote, contending that the referendum should not be permitted by the state unless the city issued a home rule message supporting it, which the city would not. Then-Governor Mario Cuomo disagreed, and the vote went forward. The vote was in favor of secession through the approval of a new city charter making Staten Island an independent city.

The Staten Island secession movement was defused, or at least deferred, by the election on the same ballot of Rudy Giuliani as New York City mayor, who had campaigned on the promise that Staten Island’s grievances would be addressed. Giuliani’s plurality in his narrow victory over Dinkins was aided by overwhelming support from Staten Island. Two of the borough’s biggest demands were closing the Fresh Kills Landfill and making the Staten Island Ferry free, both of which have since been fulfilled.